Skip to content
This post may contain affiliate links which, if you choose to utilize, can provide me a commission at no charge to you. Please read my disclaimer for more information. Money Mobilizer also receives compensation or remuneration from some or all of the companies or institutions that are discussed on this website.

I had the pleasure of interviewing Kat Sipe, a physical therapist who has the very cool role of working as a LEGO Ambassador!

She shares how she got started as a LEGO ambassador, how she draws on her background as a physical therapist to bring a unique perspective to LEGO, and how she utilizes Twitch to share her passion with others.

Be sure to give this interview a read!

Question: Can you tell our readers a little about yourself?

I graduated from PT school in 2018 (and got married 1 month after graduating!) and have been working in the acute care setting since I graduated primarily on the orthopedics floor, but with COVID I’ve been floating more to the ED and working with COVID patients. Healthcare is big in my family, as my dad is an orthopedic surgeon, my mom was a nurse, and my sister is a PharmD. In my off time I enjoy video games, which is what led me to start streaming the LEGO video games on Twitch (my husband had started streaming cooking on Twitch 6 months prior), and eventually LEGO live-building instead. I enjoy dancing and music, as I used to tap dance and play the violin.

Question: I loved playing with LEGOs as a kid! How did you first start getting involved as a LEGO Ambassador?

I learned about the Ambassador network after attending my first LEGO convention in Portland. I was particularly inspired by a group called the Women’s Brick Initiative, which had ambassador status, and how they were using their platform to advocate for less toxicity and improved representation within the LEGO community. After my channel had been established for a year I applied to the program. I didn’t expect to get in the first time, as over 90 people applied, so 6 months after applying my jaw hit the floor when I saw the acceptance email.

Question: What is your role as a LEGO Ambassador?

Being an ambassador I am a conduit between the LEGO group (through admins that run the ambassador network) and my community. I will get news or new sets to share from the LEGO group. But I also get to provide feedback from the community regarding sets or statements that are made. I also get to interact with other ambassadors on the network to talk about a variety of topics, share events (like charity drives), and see what other awesome things communities are doing.

Question: How has being a physical therapist influenced your role as a LEGO Ambassador?

A big focus that I have tried to make with my role is disability and healthcare representation, as those are particularly lacking (but are really starting to improve! The first wheelchair minifigure was only introduced in around 2015, yet LEGO has been around for 65 years (and wheelchair users have been around a lot longer than that). There have been some amazing inclusions in recent sets; one example is in the Haunted House set a wheelchair user is included, AND there’s a wheelchair ramp so the minifigure can access the ride alongside his able bodied friends. I have brought up in several places though that there are no other accurate assistive devices, like canes or walkers, which many individuals use. Crutches have been made once, but they also are not very accurate. We also don’t have a good power wheelchair model, although many builders have created their own version. I have plans to try and build my own creation of a gym that includes items like this in hopes that they could work their way into the LEGO piece collection.

Question: Do you make any money as a LEGO Ambassador?

Answer: I do not make money, but I am sent sets by LEGO which means I don’t have to use my personal money to buy those sets.

Question: What is Twitch and how have you utilized it?

Twitch is a live streaming platform, which means people can watch what you’re doing in real time (instead of a taped and edited video). In order to make money on Twitch you have to be at least Affiliate status (which is stream for 7 different days, have an average of 3 viewers, and have 50 followers). Individuals can subscribe to your channel, give you “bits” (which is the platform currency), or give money direction. It’s also a great way to run charity streams too with platforms like Tiltify (I’ve raised almost $3,000 for different charities in the past year!).

You can find me on Twitch by clicking here.

As I mentioned my husband started on Twitch first doing cooking streams and educating people about techniques and different cuisines. I originally wanted to do gaming, but I was convinced to buy the Hogwarts castle and build it on stream. Since then the primary focus of my channel has been live LEGO building. I occasionally play games or do other crafts, and I’m often on my husband’s channel as his “producer”. But the coolest thing has been to get to educate people about the world of physical therapy and healthcare while building. I’m not shy about the fact that I am a DPT, and have had many community members talk about the impact that PTs have had in their lives.

Question: What has been your favorite part about being a LEGO Ambassador?

Getting the opportunity to meet some of the designers from LEGO has been an amazing opportunity! They are the nicest people and so incredibly creative. It has been awesome to get to interview a few of them, and applaud them for their work.

Question: If another physical therapist, occupational therapist, speech therapist or nurse wanted to become a LEGO Ambassador, what steps would you recommend they take?

Start building! When people are accepted to the ambassador network they’re looking for voices and perspectives that they don’t have there. And it is certainly lacking in healthcare professionals (I believe myself and one other MD are the only healthcare workers that I know of in about 100+ ambassadors). You don’t have to build wild creations, as I tend to just build sets. But you should find a way to make your channel unique, but be genuine about what you are doing.

Question: Thanks so much for sharing with the Money Mobilizer Community! If readers would like to reach out to you, where can they find you?

Thanks for having me! Money Mobilizer readers can find me by clicking here.

Free Email SeriesHow to Make Your Money Work For You 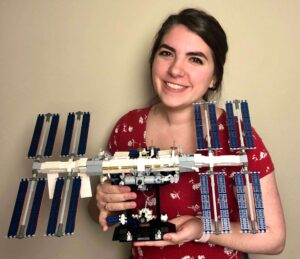 Kat Sipe graduated from PT school in 2018. At her fulltime physical therapy job, she treats patients in the acute care setting. In her spare time, she is a LEGO Ambassador and streams live-building on her Twitch channel. If you have any questions for Kat, you can find her at https://linktr.ee/DrKatBuilds.

Are you a PT/OT with money questions, but not sure where to start?Sign up below FOR FREE to...

SAVE money with exclusive discounts

We use cookies on our website to give you the most relevant experience by remembering your preferences and repeat visits. By clicking “Accept” or by continuing use of this website, you consent to the use of all the cookies as well as the privacy policy, the terms of service, and the disclaimers all linked at the bottom of this page.
Do not sell my personal information.
Cookie SettingsAccept
Manage consent

This website uses cookies to improve your experience while you navigate through the website. Out of these, the cookies that are categorized as necessary are stored on your browser as they are essential for the working of basic functionalities of the website. We also use third-party cookies that help us analyze and understand how you use this website. These cookies will be stored in your browser only with your consent. You also have the option to opt-out of these cookies. But opting out of some of these cookies may affect your browsing experience.
Necessary Always Enabled
Necessary cookies are absolutely essential for the website to function properly. These cookies ensure basic functionalities and security features of the website, anonymously.
Functional
Functional cookies help to perform certain functionalities like sharing the content of the website on social media platforms, collect feedbacks, and other third-party features.
Performance
Performance cookies are used to understand and analyze the key performance indexes of the website which helps in delivering a better user experience for the visitors.
Analytics
Analytical cookies are used to understand how visitors interact with the website. These cookies help provide information on metrics the number of visitors, bounce rate, traffic source, etc.
Advertisement
Advertisement cookies are used to provide visitors with relevant ads and marketing campaigns. These cookies track visitors across websites and collect information to provide customized ads.
Others
Other uncategorized cookies are those that are being analyzed and have not been classified into a category as yet.
SAVE & ACCEPT